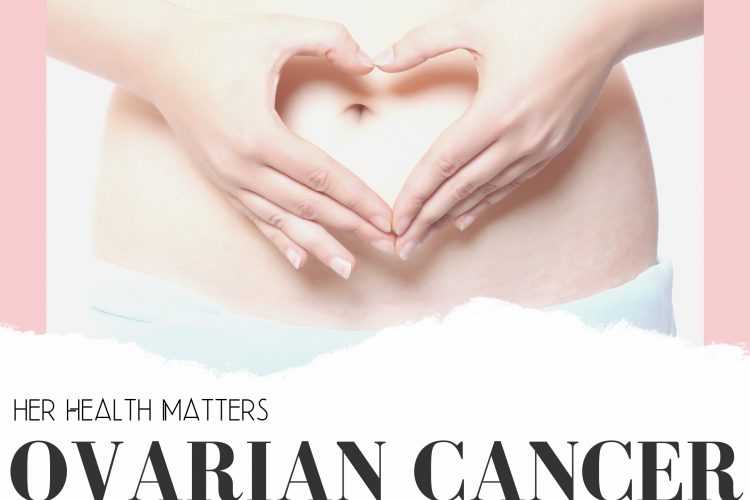 September is Ovarian Cancer Month so this week’s HerHealthMatters is all about it. As a reminder, HerHealthMatters is a little bit of  a play on words with a double meaning. It represents the importance of a woman’s health and the subject of topics this series covers (women’s health). We couldn’t do this alone (nor would I try) so we’ve partnered with Providence St. Joseph Health to provide us with the information, education and support for this weekly series. 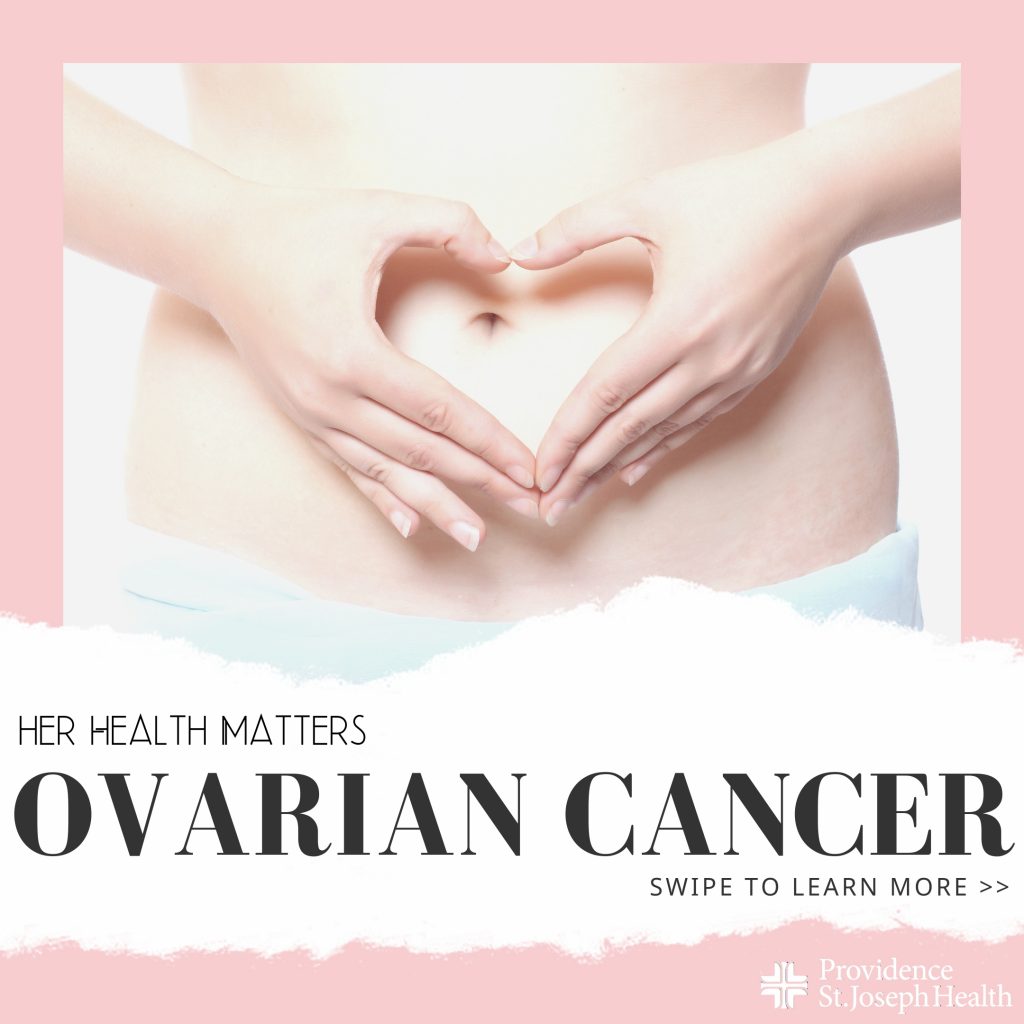 For years, ovarian cancer has been called the “silent killer” or “silent but deadly” because it’s a different cancer to detect, especially during the early stages. Here is a little more about this disease… 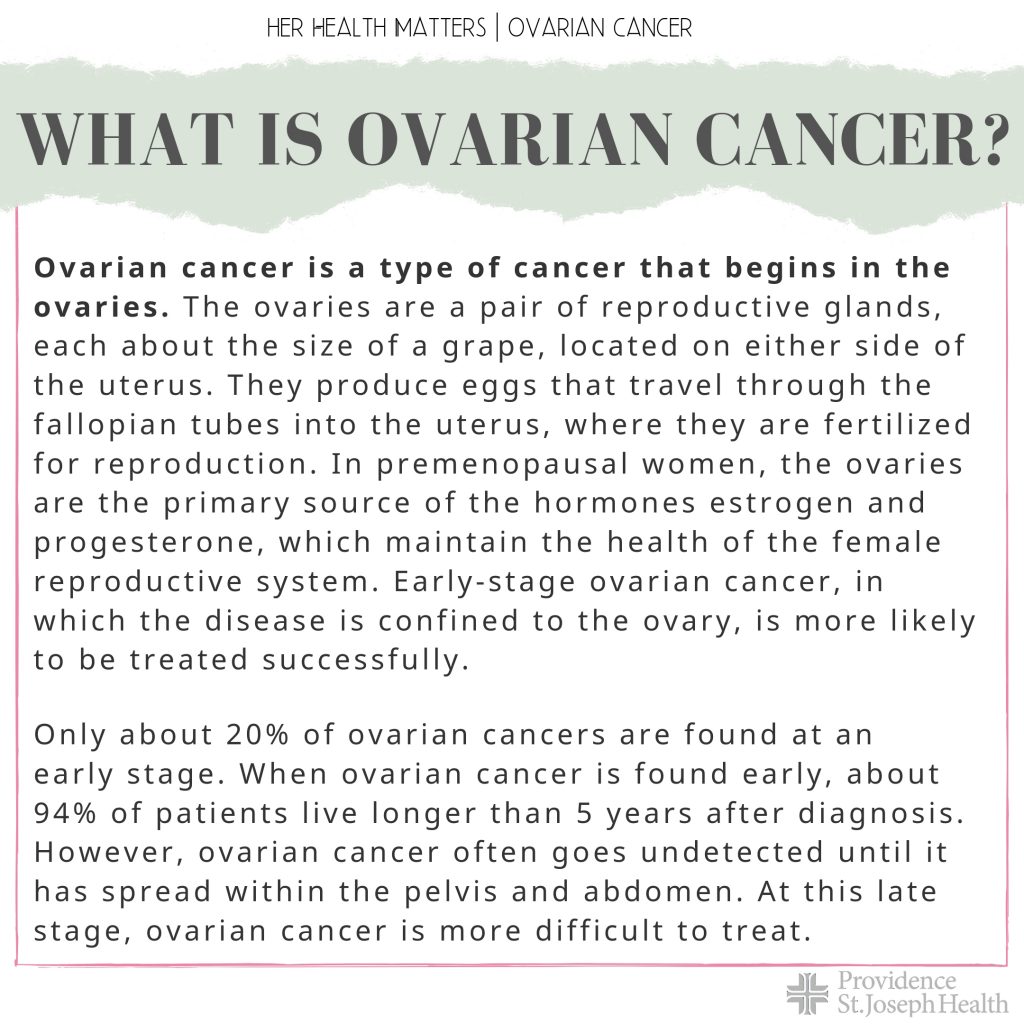 WHAT IS OVARIAN CANCER?

Ovarian cancer is a type of cancer that begins in the ovaries. The ovaries are a pair of reproductive glands, each about the size of a grape, located on either side of the uterus. They produce eggs that travel through the fallopian tubes into the uterus, where they are fertilized for reproduction. In premenopausal women, the ovaries are the primary source of the hormones estrogen and progesterone, which maintain the health of the female reproductive system. Early-stage ovarian cancer, in which the disease is confined to the ovary, is more likely to be treated successfully. 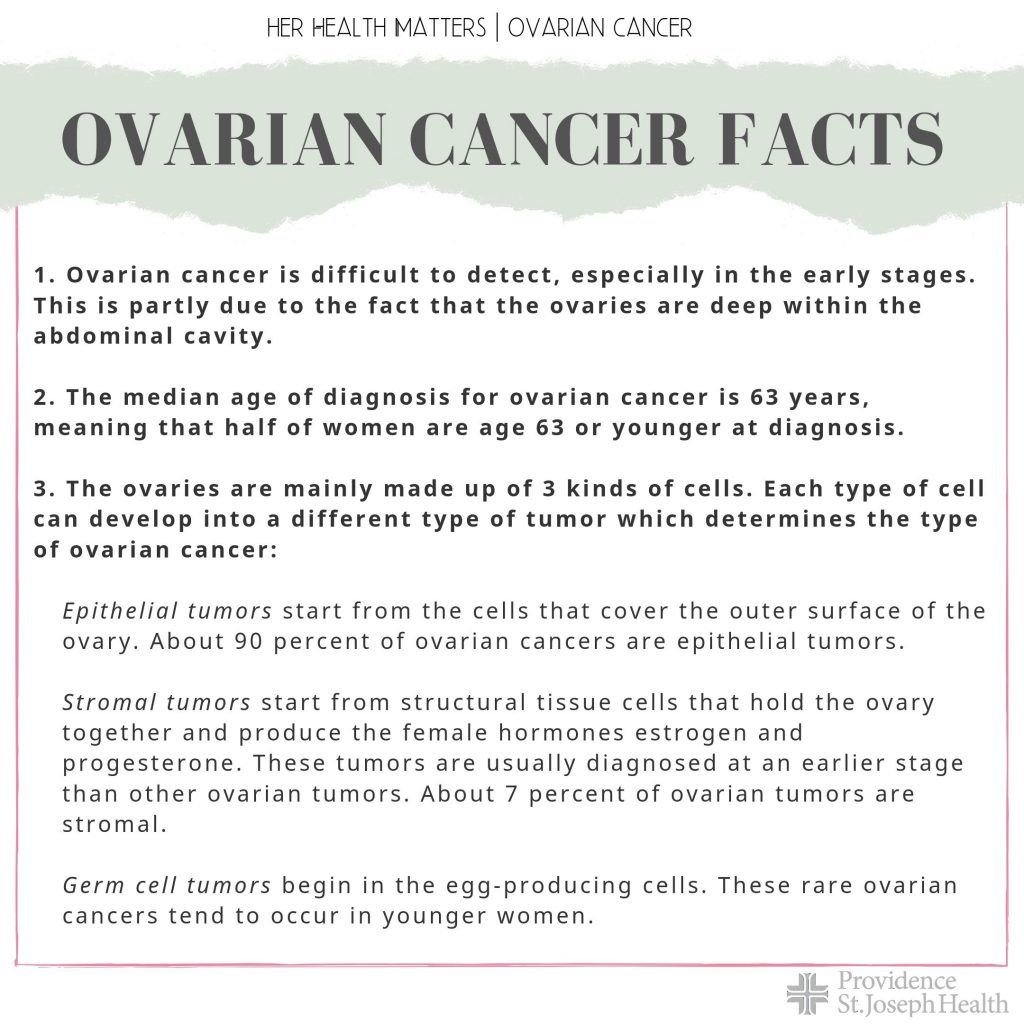 1. Ovarian cancer is difficult to detect, especially in the early stages. This is partly due to the fact that the ovaries are deep within the abdominal cavity.

2. The median age of diagnosis for ovarian cancer is 63 years, meaning that half of women are age 63 or younger at diagnosis.

3. The ovaries are mainly made up of 3 kinds of cells. Each type of cell can develop into a different type of tumor which determines the type of ovarian cancer: 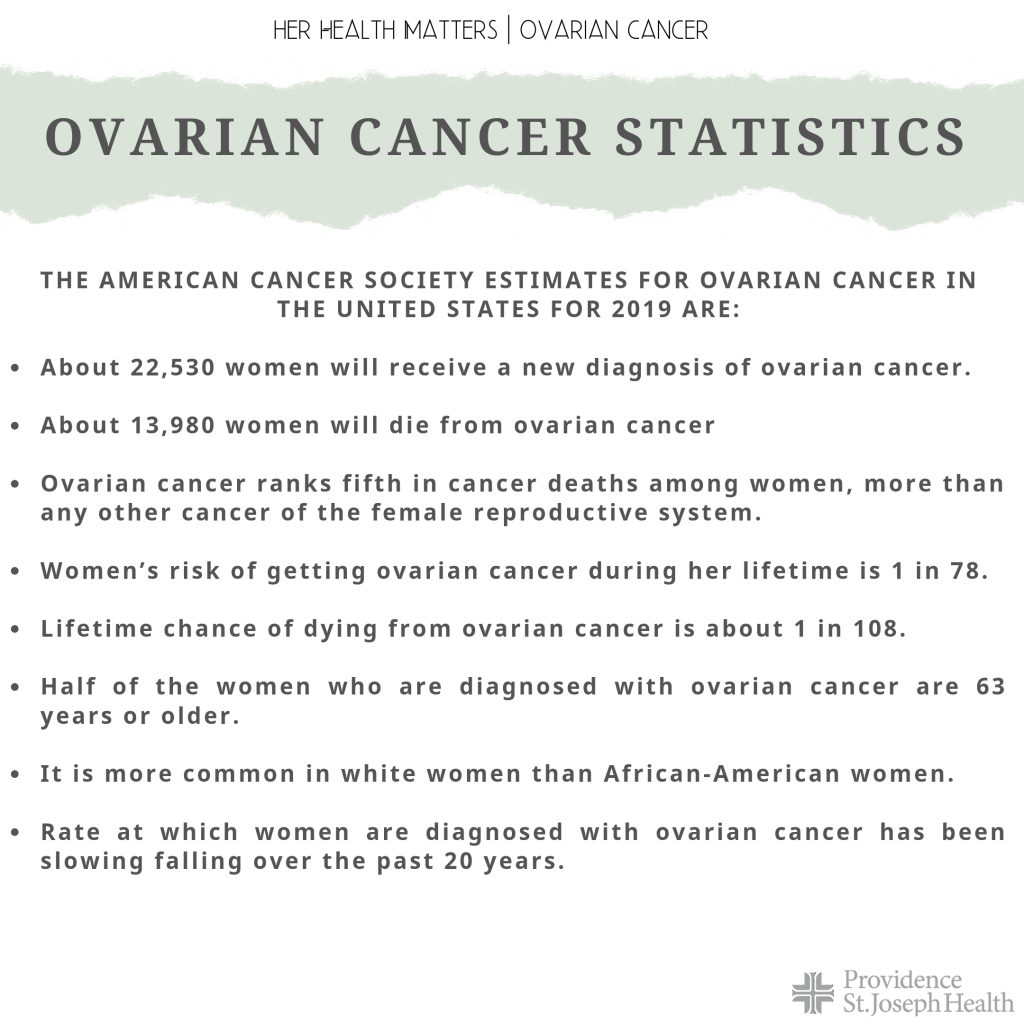 The American Cancer Society estimates for ovarian cancer in the United States for 2019 are: 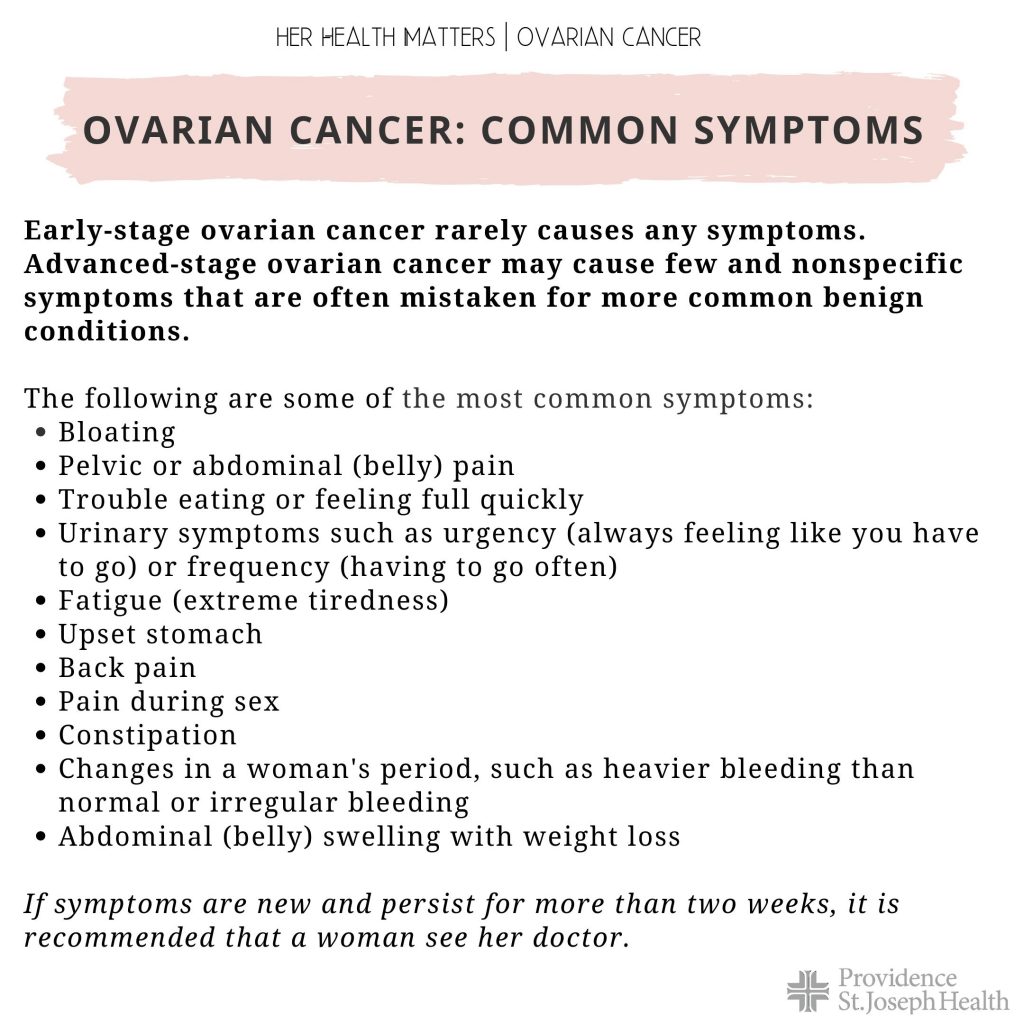 The following are some of the most common symptoms:

If symptoms are new and persist for more than two weeks, it is recommended that a woman see her doctor. 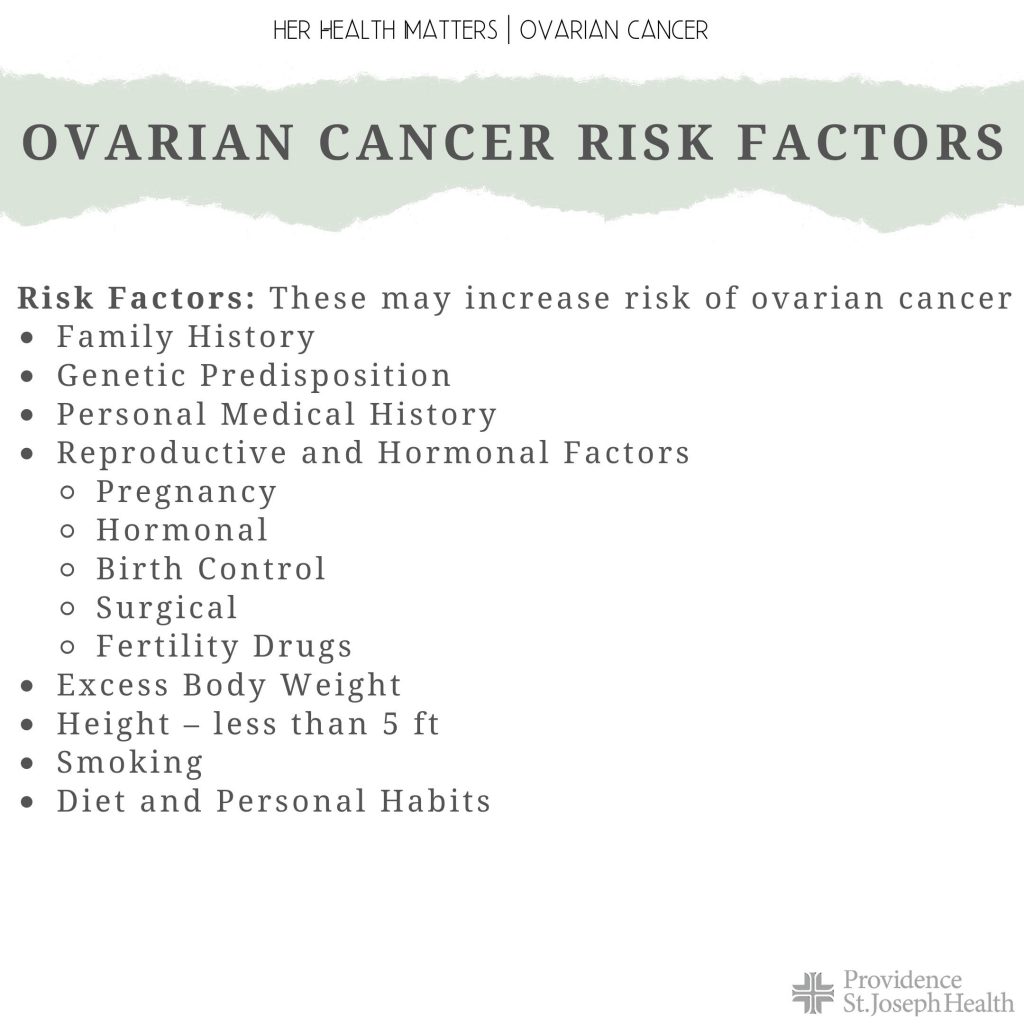 RISK FACTORS: These may increase risk of ovarian cancer 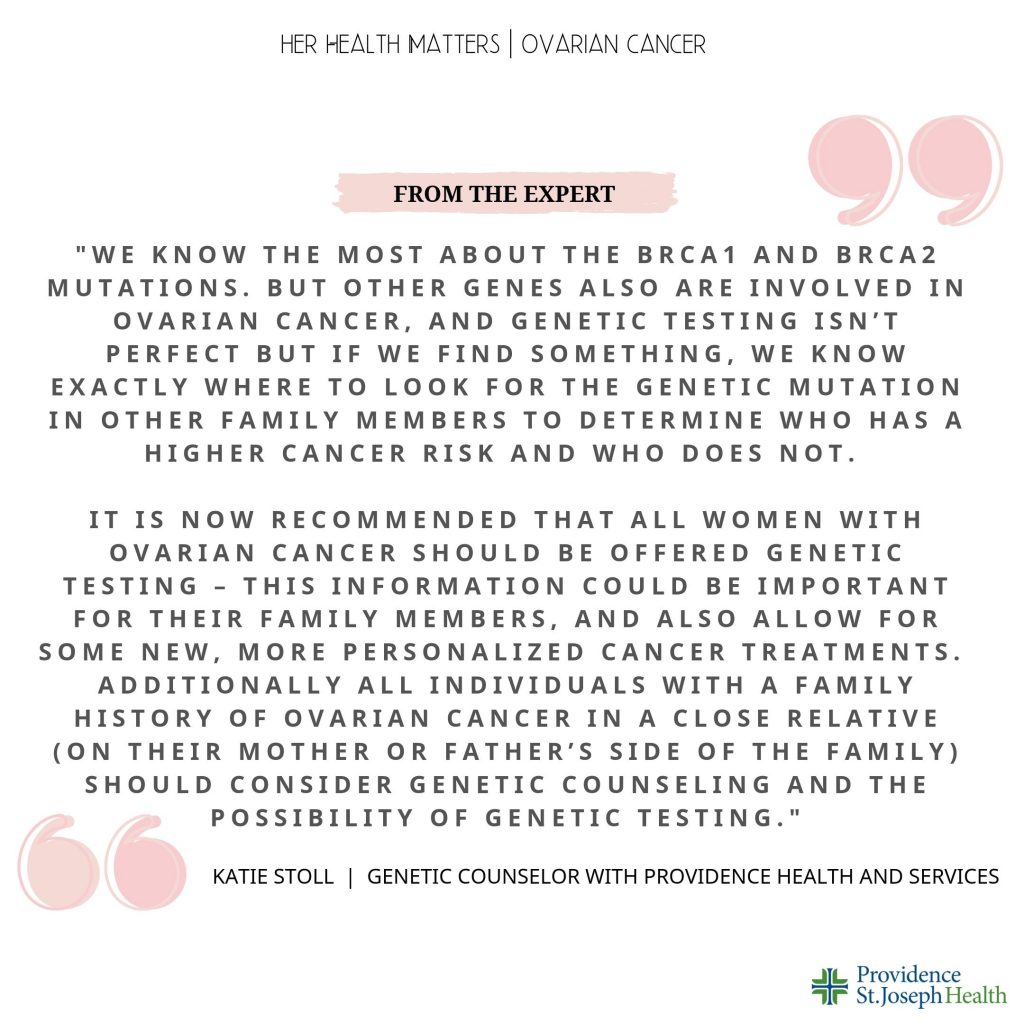 “We know the most about the BRCA1 and BRCA2 mutations. But other genes also are involved in ovarian cancer, and genetic testing isn’t perfect but if we find something, we know exactly where to look for the genetic mutation in other family members to determine who has a higher cancer risk and who does not.

It is now recommended that all women with ovarian cancer should be offered genetic testing – this information could be important for their family members, and also allow for some new, more personalized cancer treatments.  Additionally all individuals with a family history of ovarian cancer in a close relative (on their mother or father’s side of the family) should consider genetic counseling and the possibility of genetic testing.” Katie Stoll, a genetic counselor with Providence Health and Services. 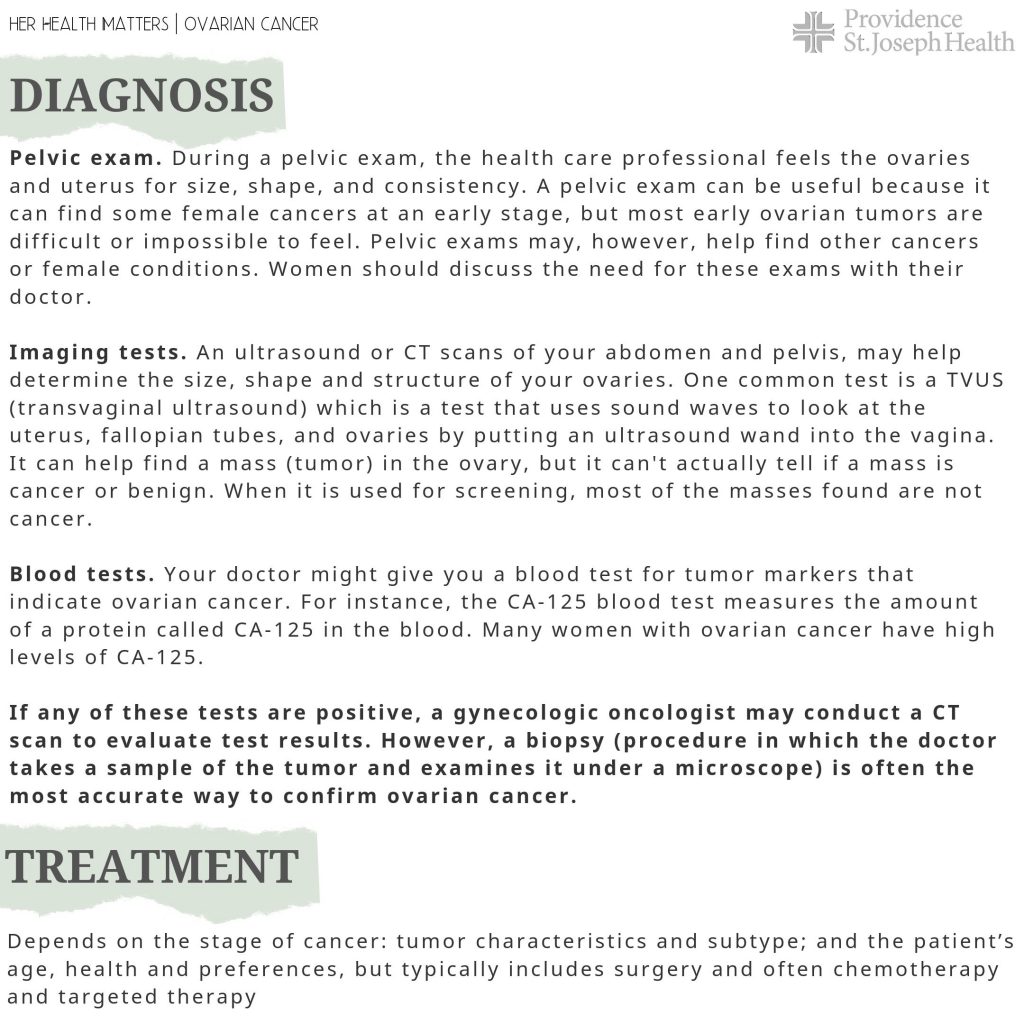 Pelvic exam. During a pelvic exam, the health care professional feels the ovaries and uterus for size, shape, and consistency. A pelvic exam can be useful because it can find some female cancers at an early stage, but most early ovarian tumors are difficult or impossible to feel. Pelvic exams may, however, help find other cancers or female conditions. Women should discuss the need for these exams with their doctor.

Imaging tests. An ultrasound or CT scans of your abdomen and pelvis, may help determine the size, shape and structure of your ovaries. One common test is a TVUS (transvaginal ultrasound) which is a test that uses sound waves to look at the uterus, fallopian tubes, and ovaries by putting an ultrasound wand into the vagina. It can help find a mass (tumor) in the ovary, but it can’t actually tell if a mass is cancer or benign. When it is used for screening, most of the masses found are not cancer.

Blood tests. Your doctor might give you a blood test for tumor markers that indicate ovarian cancer. For instance, the CA-125 blood test measures the amount of a protein called CA-125 in the blood. Many women with ovarian cancer have high levels of CA-125.

If any of these tests are positive, a gynecologic oncologist may conduct a CT scan to evaluate test results. However, a biopsy (procedure in which the doctor takes a sample of the tumor and examines it under a microscope) is often the most accurate way to confirm ovarian cancer.

Depends on the stage of cancer: tumor characteristics and subtype; and the patient’s age, health and preferences, but typically includes surgery and often chemotherapy and targeted therapy. 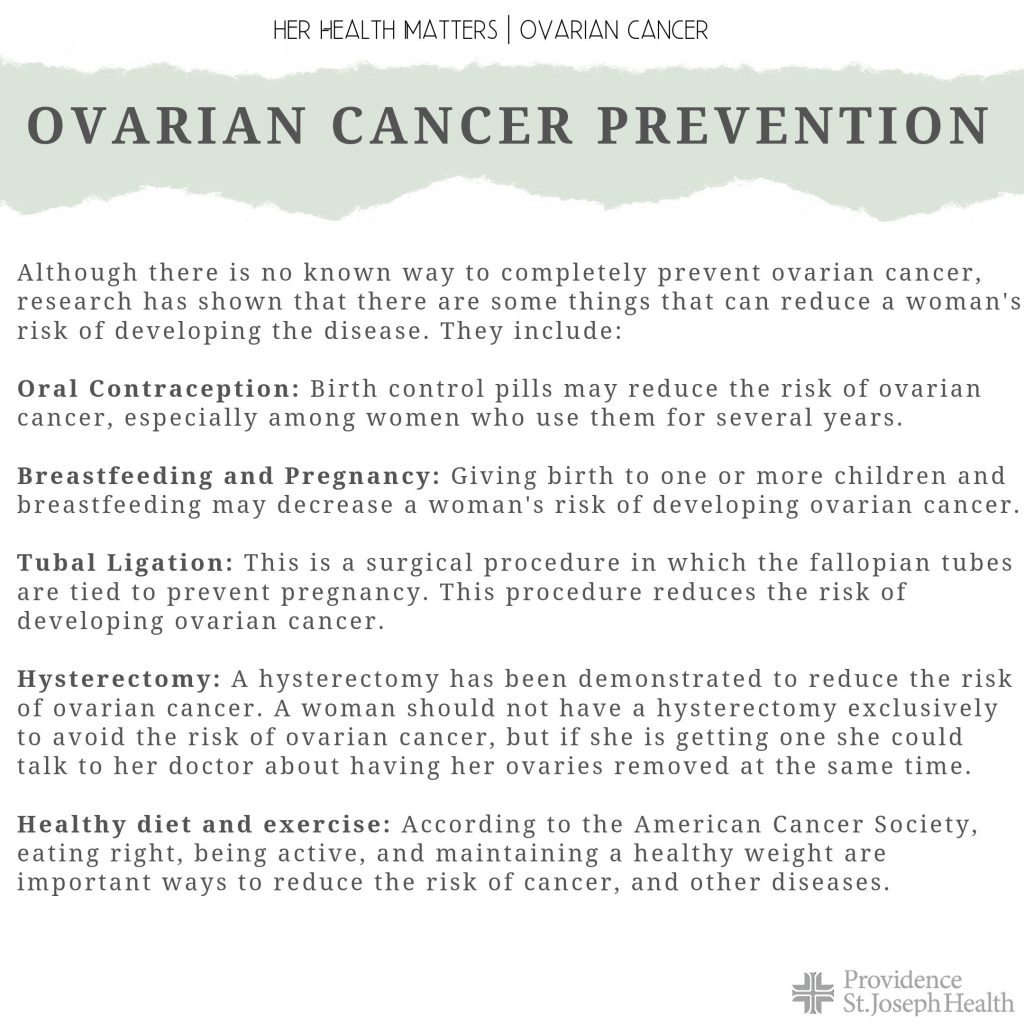 Although there is no known way to completely prevent ovarian cancer, research has shown that there are some things that can reduce a woman’s risk of developing the disease. They include:

Oral Contraception: Birth control pills may reduce the risk of ovarian cancer, especially among women who use them for several years.

Breastfeeding and Pregnancy: Giving birth to one or more children and breastfeeding may decrease a woman’s risk of developing ovarian cancer.

Tubal Ligation: This is a surgical procedure in which the fallopian tubes are tied to prevent pregnancy. This procedure reduces the risk of developing ovarian cancer.

Healthy diet and exercise: According to the American Cancer Society, eating right, being active, and maintaining a healthy weight are important ways to reduce the risk of cancer, and other diseases.

At Providence St. Joseph Health, our mission calls us to be agents of radical change for health. We’re to be a source of healing love and a beacon of hope … in the world, within each of the communities.   We believe everyone deserves a chance to lead the healthiest life possible. That’s why we’re continuously innovating to create access for all and foster healthier communities. We believe that to make the greatest impact we need to leverage the assets of our organization in partnership with other organizations of goodwill that are directly addressing fundamental needs better served outside of a clinical care setting.  Improving the health of our communities is fundamental and a commitment rooted deeply in our heritage and purpose.

Disclaimer: All information, content, and material of this website is for informational purposes only and are not intended to serve as a substitute for the consultation, diagnosis, and/or medical treatment of a qualified physician or healthcare provider.

MEDICAL EMERGENCY
If you have a medical emergency, call your doctor or 911 immediately. 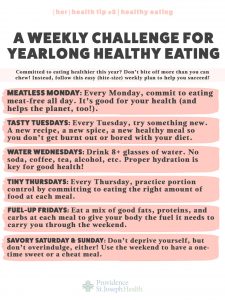 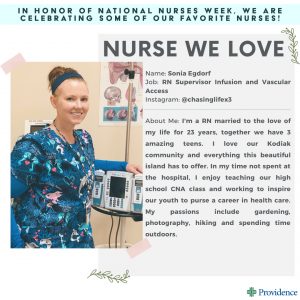 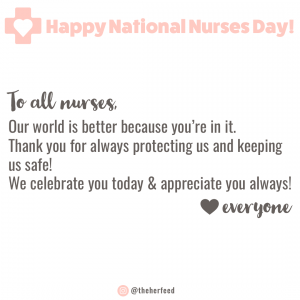