How To Be A Goddess 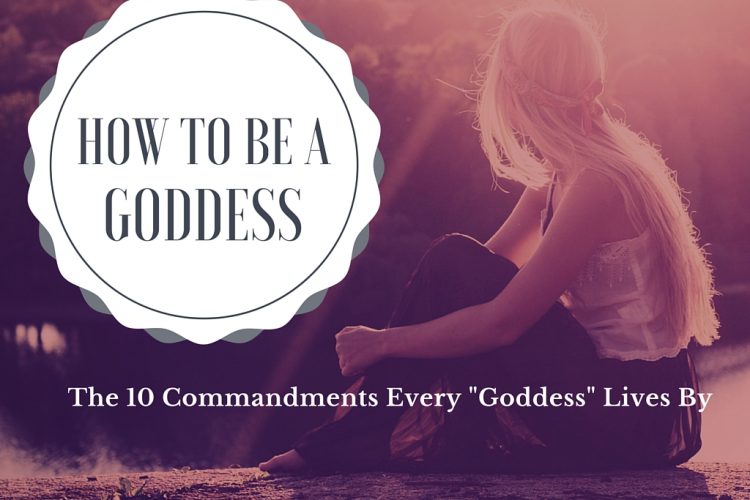 I will never forget the day I first heard Pablo Picasso’s famous quote about women.  It was a particularly tough time for me.  I’d just (finally) ended things with a very bad guy and was dealing with all the “how could I have been so stupid?” thoughts.  I told my best girl, “N,” what I’d done and she immediately sent the following text:

“Picasso said, ‘There are only two types of women – goddesses and doormats.’  You, my dear, are a goddess.”

A goddess?  Me?  Really?  Hmmmm.  Despite my doubts about the truthfulness of “N’s” comment, it made me feel so much better.  And it also got me thinking…  What makes a woman a “goddess?”  What attributes and qualities does she have?  What is it about her that makes her so attractive and desirable to men?  And could I (or any woman for that matter) truly achieve “goddess status?”

“N’s” text not only made me smile – isn’t it wonderful to have encouraging girlfriends? – it also provided the foundation for many of the philosophies found in “Jenn X.”  As I continued my journey through singledom and started my blog, Picasso’s words became my mantra and my inspiration.  I was tired of feeling manipulated and mistreated.  I was O-V-E-R looking to men for approval.  I was done done done with the chaos and confusion that often seemed to come with romantic relationships.  So, if you are anything like me and are ready to trade your worn out welcome mat for a crown and scepter, I hope you’ll read on.  Here are the ten commandments of a “goddess,” Jenn X-style:

1.  She is confident and self-assured.  What is confidence?  As far as I see it, confidence is derived from knowing who you are and being comfortable in your own skin.  It comes from believing in yourself and in your capabilities.  It is NOT arrogance.  No way.  In fact, truly confident people are humble and gracious.  They don’t need to flaunt themselves for other’s approval and attention.  They listen more than they talk and they enjoy giving compliments more than receiving them.  How you dress, carry yourself, and converse all demonstrate your level of confidence.  It’s no surprise guys are very quick to pick up on this.  When a man meets a confident woman, her value in his eyes instantly rises.

2.  She is strong and independent.  A goddess doesn’t let life live her, but instead she lives her own life.  She has goals, dreams, and aspirations separate from her love life.  In fact, she would never entertain the thought of giving herself up just to be with a man.  Catching and keeping him isn’t the end all be all of her existence and she won’t “melt” into a guy, trying to be who and what she thinks he wants.  It is perfectly wonderful to want, and even need, a man.  But to compliment you, not to complete you.

3.  She is emotionally stable.  I recently read a fascinating article.  It stated that most men have a deep need to be loved by a woman who is emotionally tough and dependable.  When I think of a goddess, I think of a woman who is in control of her emotions.  She doesn’t fall apart, break down, or throw fits if things don’t go her way.  She doesn’t become a wreck over the little things and her world doesn’t revolve around never-ending drama.  A goddess would never expect a man to act as her therapist.  (Ever!)  After all, that’s what girlfriends are for, right?

4.  She is optimistic.  A goddess has a sense of humor.  She can joke around, see the “good” in nearly every circumstance, and enjoys life.  She is not bitter and does not allow resentment to take a hold of her.  She is fun and has the ability to laugh with others and at herself.  A goddess is happy with her life and with her place in the world.  As a result, others are drawn to her and her energy is contagious.

5.  She takes care of her appearance.  A goddess knows that when she looks good, she feels good.  Her health and well-being are important to her.  She is well groomed and dresses appropriately for the situation, without trying too hard to be noticed.  As Coco Chanel said, “Dress shabbily and they remember the dress.  Dress impeccably and they remember the woman.”  It’s important not to go to extremes, however.  A woman’s attractiveness is not determined by her daily caloric intake or by sporting a four figure handbag.  Although high heels and mascara are not foreign concepts to her, a real goddess knows that true beauty starts within.

6.  She won’t chase a man.  Can you imagine a goddess throwing herself at a man or working overtime to impress him?  I sure can’t.  But how often do we women act like this?  We’ll initiate all contact.  We’ll “accidentally” run into him.  Heck, we’ll bake him cupcakes and deliver them to his office after the first date.  We might as well jump up and down while holding a sign that says “Pick Me!!”  A goddess wouldn’t do this.  Instead, she lets men come to her and show her their level of interest.  She allows a man to pursue, to court, to woo; thereby encouraging him to step up and be a man.

7.  She does not accept disrespect.  Boundaries are a good thing.  There is nothing wrong with knowing how you want and deserve to be treated.  A goddess doesn’t allow a man to throw her scraps and then try to convince her it’s an entrée.  When she is treated in an unacceptable manner, she has the strength to stand up for herself; even if it means walking away.

8.  She is not easily attained.  A goddess knows her worth.  She doesn’t give off the “I’m desperate for a man!  Any man will do!” vibe.  Instead, she occupies herself with the business of her.  She walks with pride through her own life and carefully analyzes those men who catch up to her.  She is the picker.  She is the chooser.  And she strives to choose wisely.  As a result, the man who wins her heart also believes he has won an incredible woman.  To paraphrase the famous dating quote:  PLAYING hard to get is ridiculous.  BEING hard to get is marvelous.

9.  She is feminine.  It is entirely possible to be a CEO, a professional athlete, or have an A-cup and still be undeniably feminine.  Femininity doesn’t mean acting like a little girl, a weakling, or an airhead.  Not even close.  Nor do you have to forgo jeans and baseball caps or the ability to hang with the guys.  Being feminine is about embracing yourself as a woman.  It’s about being charming and gracious.  It’s about radiating warmth and openness.  The vast majority of men are instinctively drawn to “femininity.”  At the end of the day, they want a woman who is a lady.

10.  She prizes her sexuality.  A goddess is neither prudish nor promiscuous.  Although she enjoys sex and physical intimacy, she realizes that it is a valuable gift and doesn’t allow herself to be used or treated carelessly.  She won’t dress overly provocatively or flaunt her “sex-ploits” on a date.  She waits before consummating relationships and is trustworthy in matters of fidelity.  The goddess views sex as “special” and she encourages her man to treat her like a “special” woman.

Obviously, Picasso’s one sentence quote inspired me.  It is not only the motivation behind much of my writing, it has also encouraged me to think and act more like a “goddess” in my own life.  And ladies, if I can do it – and see the results – so can you.

Jenn Clark is a relationship advice expert and author of the book “How to Be a Goddess (A Step-by-Step Guide to Becoming the Woman Men Dream About…).” You can find it on her Facebook page

Or on amazon.com at the following link: