Guy Texts You Should Never Respond To 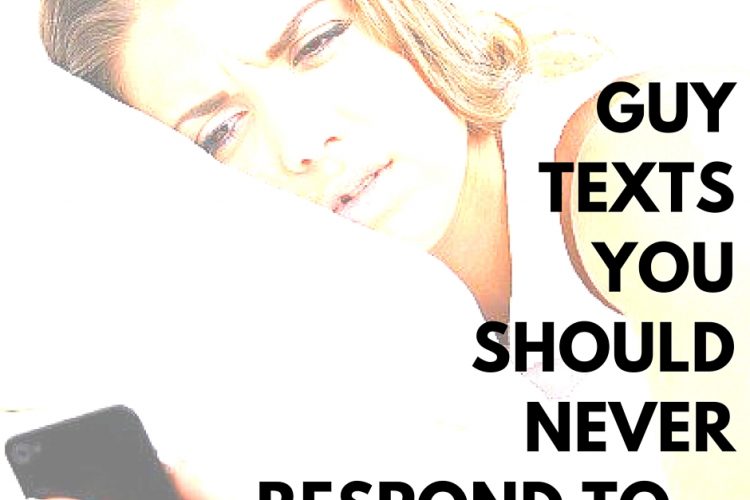 The entire dating scene is already challenging enough, and attempting to decode the meaning behind certain texts makes it that much more difficult. Below, we break down the true message his texts are sending and whether or not you should even hit reply.

Also comes in the form of “yo” or “what’s up.” This random text is just a weak attempt from the guy. Sure, he might be thinking about you, but he’s not putting forth much effort. Text back if you’re interested, but don’t bother if your feelings aren’t that strong.

Hit delete if you get this late text on a Friday or Saturday night. It’s pretty obvious he’s hitting you up as a last resort. Don’t fall for it, ladies.

“Want to meet up later?”

If a guy sends this before 8 p.m., it’s a good sign. He’s taking initiative to see you. But, if all he does is text you and doesn’t put more effort forth to make concrete plans, like making an actual phone call, he’s probably not looking for something serious. If he calls to talk on the phone, even for a few, it shows he’s interested in something more than just a hookup.

Sure, this is a bit boring, but give him a break. When a guy is into someone, his mind gets jumbled and he gets nervous, too. So, he probably just doesn’t know what to say. Help him out by asking him a few questions to hopefully get the conversation moving along, or just ask him to give you a call later.

He’s just texting you for validation. If you had a good time too, make sure you let him know. He’ll usually send this after a first date or first hookup. Give him a sweet, but short response letting him know how much fun you had too.

This is a pretty sweet text if you’ve been talking to a guy for a while and have feelings for him. But, if it’s just some random dude who keeps texting even though you never respond, do what’s necessary to get rid of him. Don’t feel guilty telling a guy you’re not interested even if you’ve given him your number.

This is just the right amount of flirting during the beginning of a new relationship. If he sends it on a random weekday it seriously means he’s into you. And it’s just plain sweet.

If you meet a guy at the bar and he texts you after last call, he’s definitely interested. Go ahead and respond if you’d like, or wait until the morning.

How do you decode guy’s texts? Did you think these were all accurate?